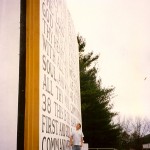 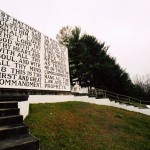 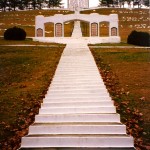 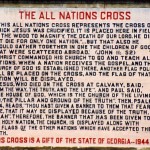 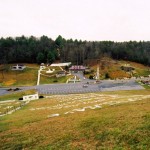 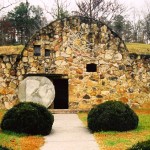 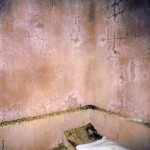 Some stories are better understood if you know the ending first. Such is the true story of Christmas.

Fields of the Wood is a Christian park outside of Murphy that depicts major themes from the Bible in monuments to inspire and uplift the viewer. In the winter, the gates are always open to visitors, even if the shop is closed.

The park was built by the Church of God of Prophesy and gets its name from Psalm 132: 6.  Ambrose Jessup Tomlinson came from Indiana in the early 1900’s to witness to local people, and decided to form the church in the area. He went up to the top of the mountain to pray, and received a vision from God about the future of the church. He and his followers bought the mountain, then formed the church which currently has over 300,000 members in 86 countries.

The park boasts the largest cross ever built: a 115’ wide and 150’ long concrete platform on top of a mountain surrounded by flags of the 86 nations in which the Church can be found.  A road leads to the top of the mountain, around the cross, and then to the overlook for the world’s largest Ten Commandments. Completed in 1945, each concrete letter measures 4’ wide and 5’ tall.  The best view of the tablets is from across the road at the covered pavilion.  The really adventurous or just young and full of energy can climb the numerous steps up the mountainside.

Across the valley is PrayerMountain- another stairway up a mountain with Bible teachings posted along the way.  A baptismal pool is open in the summer, as well as the Gospel Theatre. The Gift Shop and snack bar are open during the winter except on Sundays.  The Park is a great place to take a class of young people and let them look around for themselves.Golgothais reproduced here with its three crosses.  Next to it is Joseph’s Tomb : the borrowed burial cave where Jesus’ body was laid.  The empty tomb represented here is the grand finale of the true Christmas story, and more amazing than any fantasy ever written.

The reproduction of the cave in which was laid the body of Jesus reminded me of the cave of His birth.  Not the lofty barn I imagined as a child, but scholars say it was actually a hole in the mountain filled with stabled animals and hay and a miracle. Now when I picture the crowded cave in which Jesus began His earthly life, I picture also the empty one that began my eternal life. Have a blessed and holy Christmas.

Directions from Franklin 64 west to Murphy; left at the 4-way intersection; right on Hwy 294 to park.

If you want to visit Hiawassee Dam, it is just 6 miles down the road from the sign.