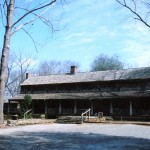 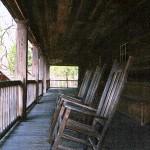 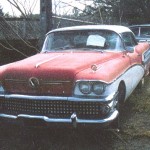 Meander through 3 states and several eras of local history as you journey down the road from Franklin toward Westminster, SC.  My favorite trips are ones like this with no particular destination in mind – just a map, a camera, and yard-sale money!  As you pass the town of Tallulah Falls, there is a short detour on the left that will take you on the old highway to some interesting shops and a view of Tallulah Gorge.  After you turn off the 4-lane onto Hwy 17, you will see a Georgia of yesterday.  An aging motel is home to a pink and white Buick boasting a chrome smile and a “For Sale” sign. Behind it a 1953 DeSoto that probably weighs as much as cement truck waits for another chance to cruise the roads.  An abandoned factory shows it age as the white paint is weathered away by the same elements that eat at the red brick beneath. Several antique shops along the way offer everything from fireplace mantels to iron toys, gleaming crystal to faded sheet music.

A few miles past Toccoa is an unobtrusive sign that announces The Traveler’s Rest Historic Site.  Built in 1815 by James R. Wiley, the inn served the first stagecoach travelers in northeast Georgia.  In 1833 Wiley sold the inn to Devereaux Jarrett, a businessman from South Carolina, for $6000.  Jarrett also operated other businesses in the area including a sawmill, a post office, a gold mine, and a toll booth. With thousands of acres of land in his name, Jarrett was known as the richest man in the Tugaloo Valley. It was at this time that the inn was expanded and became known as The Traveler’s Rest.  The Jarretts lost much of their land after the Civil War, and railroad travel siphoned off many of the visitors that had previously stayed at the inn.  The family sold the Traveler’s Rest and 3 acres around it to the State of Georgia in 1955 for restoration.

The current inn is open to tour with 8 rooms downstairs and 5 upstairs.  Handmade furniture from the 1850’s is displayed throughout the Traveler’s Rest.  The original dairy still stands on the property, as well as the slave cabin.  The dairy was later used to raise silkworms and now houses one of the original looms from the plantation.  The slave cabin which was the home for the nanny is also still standing.  The wellhouse and meathouse are reproductions of their original counterparts.  A rock located behind the inn is inscribed with pictographs that predate the Cherokees.