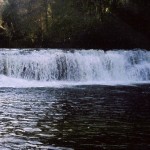 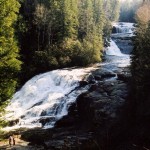 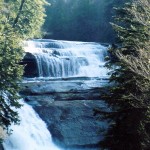 The ride on US 64 is worth getting out of the house: Cullasaja , Bridal Veil, and Toxaway Falls and LakeToxaway are all visible from the road. If you saw “Last of the Mohicans,” then you have already seen some of waterfalls and trails here.  HookerFalls is just a ¼ mile level hike from the parking lot on a gravel path.  Bring your bicycle and a picnic lunch for this day in a hemlock forest.  From the overlook you can hike a short distance down to the base of the cascade which stretches across the river like a miniature Niagara Falls. There is a small sandy area to lay out a picnic blanket or set up a tripod. HookerFalls faces northwest, so you may get the best picture late in the afternoon.

Triple Falls is a ½ mile steeper hike on a sometimes muddy path from the same parking lot as Hooker Falls.   Good walking shoes are needed for the slippery places where a trickle of water runs down the trail.  The forest on the right has some twisted tree roots growing out of  broken rocks that resemble an ancient stone wall. A small waterfall is on the left about the midpoint of the trail. It has some interesting rocks to include in your photo, especially if you walk around and try different angles.  The best light probably starts around noon for both of these falls because of the tall trees on each side.  The white water may cause the rest of the picture to be under-exposed.  One solution is to keep the brightest part to one side of the composition instead of in the middle.  The overlook for Triple Falls is a perfect location – no trees in the way and the river makes a nice “s” shape across the picture from here. There is a rail to use as a camera prop if you don’t have a tripod. All it needs is a bench, but there are stone steps nearby for the weary.

Dupont State Forest has an interesting history.  The first 7600 acres was purchased in 1996 and 1997 when DuPont sold its industrial operation and land holdings.  The 2200 center tract containing High Falls, Triple falls, and Bridal Veil Falls was owned by Sterling Diagnostic, who put it up for sale in 1999. The Conservation Fund represented the State of North Carolinain the bid process for this private sale. A real estate developer won the bid in July 1999. Many allegations were raised about the bidding process, and former Attorney General Mike Easley suggested that the state should step in if necessary to protect the forest.  In October of 2000, Governor Hunt and the Council of State voted to invoke eminent domain and paid the developer 12.5 million for the tract. Anyone visiting these falls will tell you that our tax dollars were well spent!  There are over 90 miles of hiking trails and more being added.