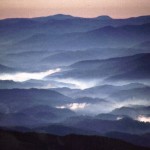 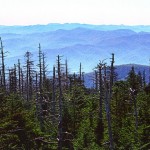 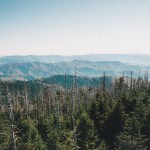 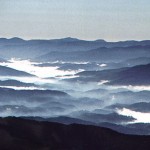 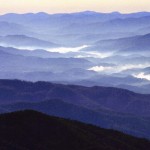 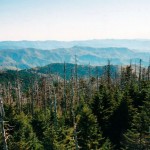 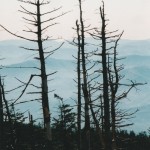 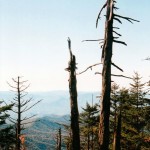 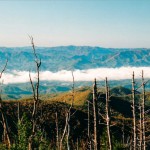 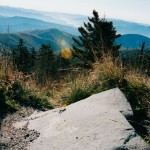 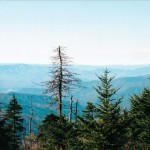 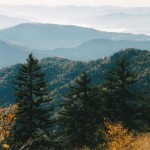 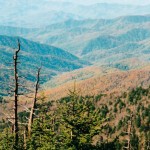 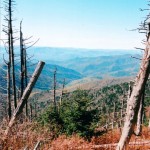 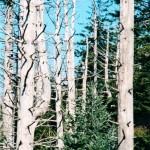 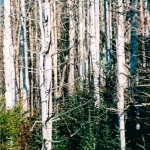 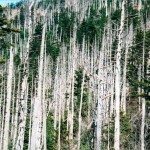 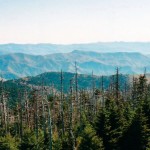 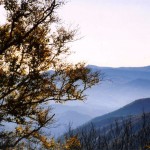 Wow! That sums it up, but keep reading for the particulars! I’ve been to Mt.Mitchell on a clear day, stopped at every overlook on the Blue Ridge Parkway, and taken photographs from the top of almost every mountain in the area. The view from Clingman’s Dome is the best and the most photogenic of them all. From the observation deck, there is a 360˚ view that is only obstructed by a thin radio tower.  Just from the parking lot the vista is at least 180˚ facing east so you can get those great morning fog pictures right from the car.

From Franklin to the Clingman’s Dome parking lot is a 1½ hour drive. Plan to be there just as the sun is coming up if you want to include the fog rising from the valleys. On a very cold morning, the fog will not burn off until later in the morning, but you won’t have the pink tint that comes from the rising sun. Keep in mind that the temperature is very much colder at this elevation, and the wind blows pretty hard in the morning. I would suggest hat, scarf, and gloves for you and a heavy tripod for the camera. The wind is strong enough to blow over a lightweight tripod, so keep a good grip on it. I didn’t see much difference much using a split neutral density filter, but the polarizer added enough blue tint to the yellow leaves to make the picture very dull. The best filter for fall color would be a ½ polarizer on the top and ½ orange tint on the bottom.

The paved trail from the parking lot to the observation tower is only a ½ mile long, but it is very steep and the high altitude makes breathing difficult for some people. There are plenty of benches along the way to catch your breath and take a few pictures. The wooly adelgid insect and acid rain have destroyed a vast number of the hemlocks on top of Clingman’s Dome. The living dark spruces speak volumes against the bleached white skeletons of thousand of trees that have died over the years. Scientists are working on different battle plans to combat the infestation, including the introduction of other insects that prey on the adelgid. There are some things that homeowners can do now the help like locating birdfeeders away from hemlock trees, not fertilizing infected trees, and spraying trees with insecticidal soap. Contact the county extension office for details.

Clingman’s Dome was named for Senator Thomas Lanier Clingman of North Carolina. He served several terms representing the Whig and Democratic parties before being expelled in 1861. He later became a brigadier-general for the Confederate Army. After the war, he devoted his time to mining and scientific pursuits. He is credited with opening some of the original gem and mica mines in Mitchell County. In 1855 he measured the highest peak of the Black Mountains. Dr. Mitchell debated with him for 10 years over this mountain until he went back to re-measure it and was killed in a fall off what is now called Mitchel lFalls. Because of this tragedy, Clingman agreed that the highest peak on the East Coast should be named Mt.Mitchell, and the highest peak of the Smok yMountains was called Clingman’s Dome.