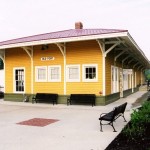 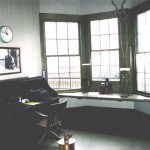 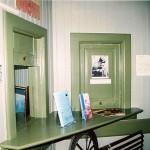 The steam engines of the Western Carolina Railroad began rumbling past the Old Fort depot in the 1890’s, on their way through the newly-dug Swannanoa Tunnel to Asheville.  Several hundred lives were lost in the construction of the tracks and the seven hand-dug tunnels, but the railroad brought much economic growth to the area.  Andrew’s Geyser, a man-made fountain, is named for the first president of the railroad, and is all that is left of the Round Knob Hotel which burned down in 1903.

Renovations to the train depot were started in 2003, and now it serves as the visitor center for Old Fort. Most of the interior is set up as the original station with the ticket window and waiting area.  I am writing a novel about a train depot, so I was especially interested in the details such as the semaphore board. An agent moved a signal arm to let a passing train know if it needed to stop or just slow down enough to pick up messages that were held out on the mail hoop.

The Mountain Gateway Museum may stand on the site of the old fort built by Gen. Griffith Rutherford’s militia during the Revolutionary War.  Juan Pardo built a log blockhouse in the area in 1566 during his quest for more land and gold for Spain, but details are sketchy. (He explored as far as Franklin the next year.) The main building dates from the 1930’s and 2 log cabins were later moved to the site.

Weavers would be interested in the display of yarns made from local vegetable fibers. Next to that is an educational layout of local plants and their medicinal uses, complete with antique products.  A pair of shoes from 100 years ago would be hard to tell from the modern clog.  Don’t miss the photo of the Model T stuck in the dirt road – it looks like the men had been out “mud bogging”!