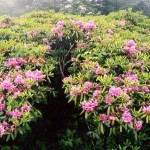 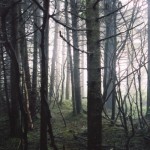 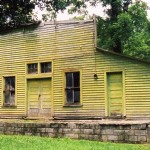 Photographers usually pay more attention to weather reports than other travelers. For this trip, I had hoped for the sun to come out after the rain and I would be able to take breathtaking pictures of the mist rising from the valleys with red rhododendrons in the foreground. So much for best laid plans. The sun never came out, the top of the mountain was totally fogged in, and the rhododendrons were not in full bloom this year. But I did manage to get some good shots of the forest in the fog. Even dead rhododendron branches that are twisted and curled make an other-worldly landscape scene.

The drive is wonderful up I-26 to hwy 173 to 107 and through Hughes Gap road which is a sometimes gravel road.  I had to stop and ask directions so many times that I don’t recommend this way for the faint hearted. Of course, I like to take the small back roads like this where I passed century-old log cabins and little country stores. This was in 2005)

Roan Mountainis famous for the deep pink Catawba Rhododendrons that bloom in late June. Even though they were harvested in the 1930’s and sold to nurseries, there are still hundreds of acres of them left to view.  The short bushes leave plenty of room for a good view of the mountains.  The hiking trail is easy and offers many photo opportunities in every season.   There is a paved trail especially for wheelchairs so everyone can enjoy the large blossoms. You will probably need a light jacket all year because of the constant wind blowing at the 6286’ summit.

General John Wilder bought the 7000 acres on the top of Roan Mountainin 1870 and built a log inn, followed by the Cloudland Hotel. Nothing remains of the 300 room hotel now except the parking lot which is a trailhead for a 1.2 mile hike.  Two popular hikes start from Carver’s Gap.  One begins across the highway and leads over a grassy bald which is a unique ecosystem. Scientists believe that prehistoric animals may have kept the bald free of shrubs for millennia.  Today the bald offers panoramic views of the surrounding mountains.