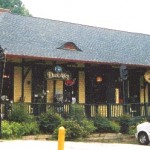 Saluda was exactly as portrayed on their web site: historic, picturesque, and friendly. All of Main Street is listed on the National Historic Register.  I started at the train depot because I am using one as the main focus of a novel I am writing (surprising enough called “The Depot”).  It is painted colors matched from the original paint found in a Columbia, SC warehouse. The antique shop in the middle is housed in two of the original rooms. One has a bay window where the telegraph operator sat and could see up and down the tracks. If he had a telegram for someone on a train that was passing through Saluda, he could put it on a long pole and hang it out the window for the conductor to collect on the way by. The other room was the colored waiting room. The shopkeeper told me that when she is alone at there at night, she has noticed that the waiting room has a different “feel” to it. She believes it is because the families were happy as they waited to go on a trip and probably sang religious spirituals that still affect the room today.

Pace Hardware was opened in 1899 and still sells denim overalls, iron cookware, and a mean ginger ale (remember to open it at the machine or you’ll get 10 miles down the road and still be thirsty like I was!).  The City Hall/Police Station was built at the turn of the last century as the Carolina State Bank which failed in the Depression. It has the type of pressed metal façade usually found in larger cities. A 19th century caboose from the Southern Railroad line serves as a coffee shop. Other buildings have been remodeled into shops and restaurants.

The town began as Pace’s Gap at the crossroads of Winding Stair Rd.to Greenville and Howard Gap Rd.to Spartanburg. The Pace family built an inn to house travelers and pens to hold their livestock.  Southern Railroad built a line over Saluda Mountain, creating what is still the steepest mainline standard gauge grade in the country. The Saluda Grade proved to be fatal for 27 men by 1903.  Spurs were built to utilize gravity to stop trains that were out of control, much like our runaway truck ramps of today.  A trainload of cattle was destroyed on one such spur which was then named Slaughterhouse Curve. The first passenger train passed through Saluda on July 4th, 1879.  No trains run now, but the town is looking at some possibilities to get it started again. In 1881 the town’s name was changed to Saluda, from a Cherokee word for “corn river.”   WWI, the Depression, and the invention of air conditioning all caused the decline of tourists to the cool mountains.Saluda is now home to 565 year-round residents, including artists and crafts people attracted to the small town.

Pearson’s Falls was discovered by Capt. Charles Pearson, the engineer who scouted out a route for the railroad. He bought the land for his family who let generations of visitors enjoy the falls until his son needed to sell the property to a timber company. The Tryon Garden Club bought the land in 1931 to create a private preserve that is open to visitors and college botany departments.  This is a very beautiful trail with many small waterfalls before you get to the big one. Photographers beware: it is not permitted to take photos for commercial purposes.

Directions from Franklin: Hwy 23 to I-40 to I-26; exit 59 to Saluda; return by going through town, over bridge, make left on Lake Summit Rd; follow around lake to Old Hwy25 at stop sign; right to I-26 ; entrance to Pearson’s Falls is just before town on the left, then 3 miles down the gravel road and thru an underpass.