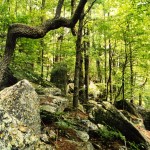 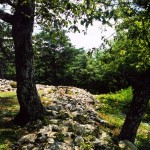 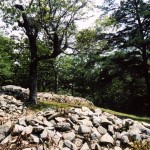 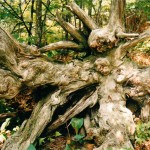 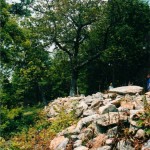 Tracking a legend can be a treasure hunt to solve a great mystery, or it can be a snipe hunt – a long hike in the woods for nothing. Fort Mountain,Georgia, has an ancient wall of unknown origin that winds 855’ across the top of the mountain.  It is 7’ high in places and up to 12’ wide, with 29 pits built along its length.  To the unimaginative eye it looks like a pile of rocks from a quarry.  But to us dreamers, this rubble may have been the beginnings of a fort built by Europeans 300 hundred years before Columbus.

Like any good mystery, the origin of this wall has many possible theories to explore.  Some scholars believe that Native Americans built the wall around 500 AD for sun worship.  The wall runs east-west and is constructed of light colored, non-native rock that would be in full sun on one side at sunrise and on the other at sunset.   Another theory is that Hernando de Soto built the wall in 1540 as protection from the Cherokee.  This seems a little unlikely to me after seeing the actual wall – it follows the slope of the mountain like a snake.  Who would waste time hauling in rock from off the mountain and then piling it in a pattern when a simple line would have been quicker?

My favorite theory, and the one that drew me to see the wall for myself, is that Prince Madoc of Wales sailed here in 1170 AD looking for a better place for his people.  He may have landed in what is now Mobile Bay,Alabama and worked his way up to Lookout  Mountain,Tennessee.  The Historie of Cambria, published in 1584, describes Madoc’s trip to “that fayre and large countrie” with “such men and women as were desirous to live in quietness.”   Three pre-Columbian forts lead up the Alabama River to Lookout Mountain where there is a fort nearly identical to Dolwddelan Castle where Madoc was born.  In a letter dated 1810, Tennessee Governor John Seiver recalls an earlier conversation with a 90 year old Cherokee chief who said that the people who built the forts were “a people called Welsh and they had crossed the Great Water.”  There are also stories of white Indians in Alabama who spoke Welsh.  Perhaps the people left here by Prince Madoc later became the mysterious Mandan tribe….

If you decide to investigate this mystery for yourself, or just want a vigorous hike, Fort Mountain has several trails around the Park.  The longest, Gahuti Trail, is 8.2 miles.  The yellow  trail up the mountain is longer than the red trail and winds around huge boulders and old, twisted trees on the face of the mountain.  If you’re looking for nature photos here, don’t miss the moss and lichens on the rocks.  A few overturned trees had very interesting patterns in the old roots.  Only take one camera and lens, and no tripod – this is a very steep trail with steps built into the side of the mountain.  As always, take a cell phone and bottled water.

Directions from Franklin:  Hwy 64 west past Murphy; right on US 411 to Chatsworth, GA (it’s an underpass) ; left on Hwy 52 to Fort Mountain State Park; when you come out of the Park, make a left again on Hwy 52 to Ellijay; take 515 and 76 to Blairsville;  left on Hwy 19 which brings you back to Hwy 64. Make a right to Hayesville then Franklin.