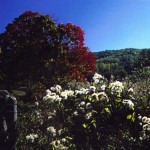 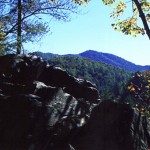 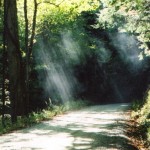 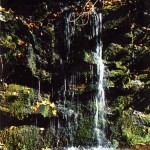 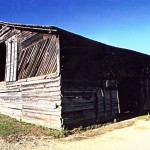 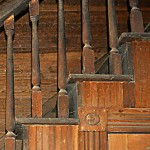 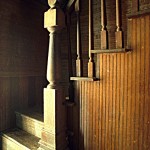 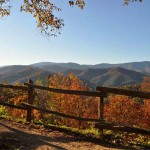 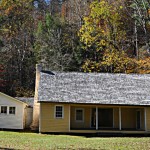 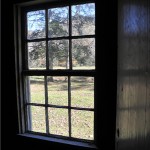 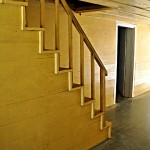 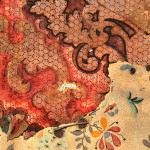 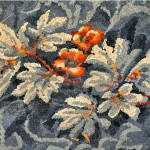 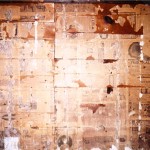 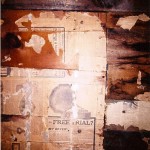 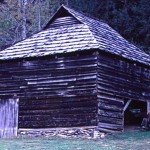 The first white settlers followed Indian trails into Cataloochee in the early 1800’s as the surrounding areas became “too crowded.”  Colonel Robert Love, a post- Revolutionary War land developer, owned the valley and granted homesteads to young adults starting with the Caldwells in 1814.  Hiram Caldwell built the 2 storey white house on the creek in 1906 to replace the log cabin the family had been living in. The family looms and quilt frames once stood upstairs, ready to weave wool from the sheep that they raised. Wool was also used as quilt batting, which would have been tough to push a needle through.

The Palmer Chapel was built in 1898, and a Methodist preacher visited one Sunday a month. Three schools once operated in the valley. Only the Beech Grove School built in 1903 still stands. The school year in the 1920’s ran from November to January, unless funds were available to extend the term to February or March.

Early in the morning or just before dark each evening, the small herd of elk wanders out into the grassy fields of Cataloochee where you can see and photograph them from your vehicle.  The first 25 elk were brought from Kentucky in 2001 to begin the National Park Service’s reintroduction of elk to the Park. Another 27 elk were moved here in 2002 as part of a 5-year experimental phase to see how they interact with the environment and the Park visitors.  The native elk have been gone from this area since the late 1700’s.

Cataloochee Valley would make a good weekend photo safari for a camera club.  The campground has 27 individual sites  and 3 group sites.  The houses and other buildings are open for visitors to walk through, but they are empty. Even so, there are many photo opportunities.  The yellow and white house before the campground has several layers of original wallpaper peeling off (or being pulled by vandals) that make an interesting contrast against the old wood slats.  One room has ancient newspaper glued to the wall.  The barns have great artistic potential, especially in the early morning fog or late afternoon sun.