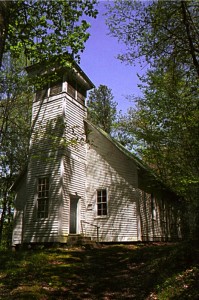 Did you know there are ghost towns in North Carolina? Judson was a small town that was flooded to create Fontana Lake, and in theGreat Smoky Mountains Park there are Cataloochee, Cades Cove, and Smokemont. Most of us know about the campground at Smokemont, but before the Park was created there was Bradleytown.

White settlers first came into the area along the Oconaluftee River in the 1790’s. In 1831 construction for the Oconaluftee Turnpike was begun to make a wagon trail along the river to Sevierville, TN.  The community remained through the Trail of Tears in 1838, and formed a regiment for the Civil War under Will Thomas that included white and Cherokee men.

Champion Fibre Company started to log the area in 1917, creating a community that included a hotel, company houses, a commissary, and the mill. Steam trains were brought in and tracks built to haul the timber to market. Timber that floated well – ash, poplar, and cucumber (magnolia) trees were floated down streams that had been dammed. When enough timber had been cut, the dams were blown up and the logs floated to the mill.  Logging stopped when the Park was formed in 1934.  A Civilian Conservation Corps camp was established at Smokemont next, including men like my uncle who were sent here from as far away as New York and may have worshipped at the church that is still standing.

The Lufty Baptist church was formed in 1836 with meetings in a log schoolhouse. The present church was built in 1896, and is the only remaining structure of the town that later became known as Smokemont.  Baptisms were performed in the nearby river. Dr. Ed Connor suffered a stroke 1921 and thought he was about to die, so he carved his own coffin from a walnut tree that he had planted. He dressed in a burial suit and conducted his own funeral at the church, but lived for 15 more years! In 1925, the man who had donated the land for the church was removed from the congregation for playing crochet on Sunday.

The present campground is located next to the river, with a riding stable nearby.  If you weigh less than 200 lbs, you can take a guided trail ride for the 2.5 hour waterfall ride. Reservations are required for the campground during the summer season.

Directions:  441 north through Cherokee to the GSM Park; just past visitor’s center on right